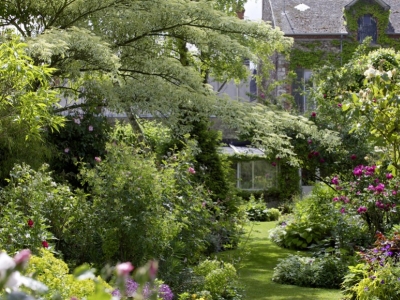 For André Eve's garden in Pithiviers

The Friends of André Eve association has launched a subscription via the French Heritage Foundation to acquire the rose grower's house and garden in Pithiviers.

Located in the heart of Pithiviers in Loiret, the garden created by rose grower André Eve is the birthplace of his activity in search of old roses that he has allowed so many gardeners to rediscover, but also an extraordinary garden rich in thousands of his finds of succesful associations of roses with perennials, bulbs and shrubs. An invaluable jewel that the association of his friends, formed just after his death, has been helping for 5 years to maintain, to open to visitors, to share with the children of the region, while working on the archives with the support of Yvonne Eve, who permanently opens the doors of this garden to the association.
In 2021, the association wishes to become the owner of the house and the garden and has launched a subscription via the Fondation du Patrimoine.

The house and garden are currently owned by his widow. In order to secure the future of this property, Yvonne Eve wishes to sell it during her lifetime to the Association of Friends of André Eve. To do this, € 200,000 is needed to complete the budget which includes the purchase and some work on the house. The sale will reserve Yvonne Eve the right to use the house she continues to live in.
Thanks to your donations, the association will be able to remain faithful to the work of André Eve by continuing to make his garden and his house one of the places where the future of the rose bush and gardens is being invented.

A world famous garden
André Eve set out to create a garden at his home in Pithiviers at the start of the 1980s. There he implemented personal innovations in the landscaping field and helped to renew the general public's interest in old roses.
Very early on, he recommended abandoning chemical treatments and presenting the rose bush in the midst of a great diversity of perennials. He revolutionized the idea that we have of what a rose bush, its use in gardens and its maintenance.
During André Eve’s lifetime, this garden will be visited by tens of thousands of people, famous (Catherine Deneuve, Anny Dupérey, Pierre Perret, the king and queen of Belgium,, ...) and anonymous. André Eve will tirelessly teach there his innovations and his experiences. Its Pithiviers garden thus becomes one of the most famous French gardens in the world.

Preserving the work of André Eve and passing it on
The Association of Friends of André Eve was created in October 2015, a few months after the gardener's death, and has 150 members in France and around the world. Its goal is to preserve and help promote the work of André Eve. As such, it maintains, restores and has reopened its garden in Pithiviers to visitors. It strives to preserve the links between the places where André Eve worked and in particular between the gardens he designed in France and in Europe.
In order to organize its work, the association has set up several technical committees. The garden technical committee is responsible for defining the garden management plan and coordinating the work of volunteers. The archives committee has been coordinating the inventory of archives for 5 years and responds to requests from journalists and researchers.
The house, in addition to housing spaces for public reception and understanding of the place, its history and the work of André Eve, will host residences for landscapers and researchers who have come to develop innovative projects in the field. roses and gardens. Their work will be the subject of presentations which will complement and renew the general public's interest in the place.

The French Heritage Foundation (Fondation du Patrimoine)
The first private organization in France dedicated to safeguarding local heritage which is most often not protected by the State, the Heritage Foundation is a non-profit organization created by the law of July 2, 1996. Recognized as being of public utility by the decree of April 18, 1997, its mission is to safeguard and enhance the national built, movable and natural heritage. Organized around its 22 regional delegations, it supports its action on a network of more than 560 volunteer delegates who work every day to preserve this local heritage.
With more than 35,000 public and private projects supported since its creation, it actively participates in strengthening the attractiveness of territories by becoming, over the years, a privileged partner of local actors and an effective engine of sustainable economic development in our country. , by contributing to job creation, by participating in the transmission of know-how, professional integration, and training of young people.
Popular patronage which appeals to public generosity is the most emblematic tool of the Heritage Foundation, which in 2019 raised 16.1 million euros thanks to the generosity of more than 49,000 donors.

Donations, which can be partially tax-exempt, can be made directly online here:
https://www.fondation-patrimoine.org/les-projets/maison-dandre

For any information, contact the Association of Friends of André Eve
communication@amisdandreeve.fr